The history of mushrooms and wild berries brought to the Italian table is the story of Monica and Massimo, the two founders of Asiago Food.

It is a story that is both modern and ancient, local and global, personal and about community, stretching back more than thirty years in the cultural and environmental setting of the Seven Cities of the Asiago plateau.

This is a region that since ancient times has made a shared cultural identity and a celebration of local specialties its strength. It is a regency of seven cities that are independent, yet integrated as a social system, in an ancient intuition of what the world would come to be hundreds of years later.

This is how Asiago Food was born, from the intuition of Massimo and his wife Monica, who wanted to make the produce from their region – mushrooms and wild berries – more available. Initially in the Seven Cities area, and later across Italy, the pair worked tirelessly to create not only a linear chain, but a system in which every player has a stake and contributes to the process of creating the final product.

Today Asiago Food has grown. The offices have moved a few kilometers onto the plain, but it still remains the same, tied to this land and what it produces, to the people, and to its system so firmly that it has successfully integrated itself into another world as well, not extremely close geographically speaking, but culturally quite similar: the forest-pastoral communities of Bulgaria.

Today Asiago Food is also an organization that belongs to the organic chain in this protected and authentic place: mushrooms, strawberries, wild strawberries, cherries, blueberries, wild raspberries and blackberries, all frozen a few hours after harvesting to offer people products that are “fresher than fresh”.

Asiago Food is a guarantee of genuine and completely natural forest products, a guarantee that grows from the very character of the people who conceived and founded the company and from the system that they designed around it.

It’s a system of people working collaboratively – people who share the vision of Massimo and Monica, and now of their three children as well. It is a true group ecosystem made up of local farming, production, and commercial companies in which the contributions and benefits are shared and transparent, and in which the final value it creates is greater than the sum of its parts: both for consumers and for the communities in the region.

Remaining true to itself, today Asiago Food is the largest Italian company in the sector: more than 10 tons of mushrooms are gathered each day, and more than 2 million packages are sold, distributed by the leading distribution chains in the worlds, covering 30 countries.

Preferred by consumers for their own meals at home, and preferred by restaurant professionals as the ingredients for their creations.

This goal has been achieved through an entrepreneurial grit and passion that has never flagged. On the contrary, investments in technology and security have been exponential in order to support continuous growth.

It is a company in which technological investments are instrumental to putting down roots in the only area that truly matters in today’s market: exhibiting one of the highest industrial standards in the sector and working daily and with great dedication to interpret a consumption experience that is recognizable, differentiated, and gratifying.

We work hard everyday in order to ensure our customers receive top quality products that have been rigorously monitored throughout every stage of the supply chain.

We carefully select the collection areas around our manufacturing sites to ensure the selection, processing and freezing stages take place in a way that preserves the product’s flavours and aromas.

The delicate nature of natural products requires rigorous respect for processing methods, motivating all of our staff to improve the quality of company processes every day: information sharing, training to improve skills, and investments in new technologies all raise our qualitative standards, in the service of food safety.

We endeavour to achieve constant improvement in order to provide our consumers with complete transparency and food safety.

From the forest to the table

Asiago Food products are followed through every step of the production process, from the source of the fresh product through to stores.

We are able to trace the history of every item and each step in its transformation, reconstructing its path precisely with documented information.

Our internal control system, implemented according to HACCP standards (critical control points analysis), allows us to manage and monitor each phase of processing, packaging, storage, transport, and distribution to ensure full respect for quality and process standards.

Having always demonstrated a strong commitment to the reliability of its products and consumer protection, Asiago Food is IFS Food (higher level), and BRC (grade AA) certified.

Organic certificate is issued by Bioagricert. 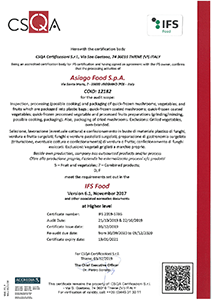 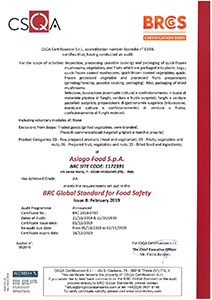 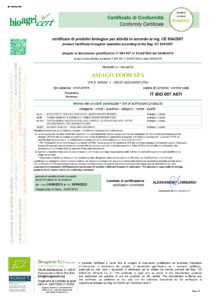 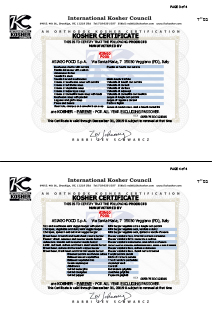